What's the difference between the 100+ roles in software testing?

There are literally hundreds of different roles in Software Testing. Yes, actually, see this large and still incomplete list. 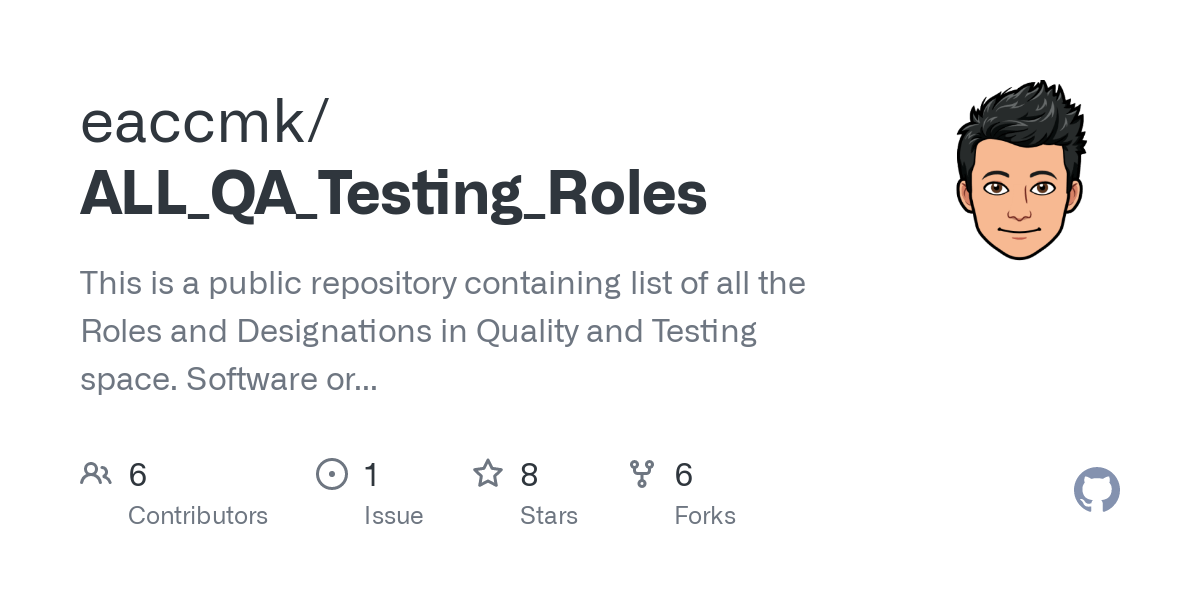 GitHub - eaccmk/ALL_QA_Testing_Roles: This is a public repository containing...

This is a public repository containing list of all the Roles and Designations in Quality and Testing space. Software or Hardware Engineering. Add yours - GitHub - eaccmk/ALL_QA_Testing_Roles: This ...

I can see some patterns in these roles:

Even here, there can be lots of overlap, or wildly different realities once you join.

I’ve got questions for you! You knew I would get there eventually…

For my first three roles none of them were like the job posting:

But all in all, titles for the most part are pretty vague and I’ve never really been in a situation where the actual job is the same as the job advert - my last position is a lot closer to what was advertised, compared to previous one. Sorry for the long rant

Thank you! This is gold, I think it really helps to set expectations for new folks in the industry, or those looking for their second or third job to get this reality check. Jobs are different, but the role title isn’t really the bit that makes it so in many cases!

At the same time, hiring managers put in a lot of effort, sometimes, to get the role title and description right. And they need a reality check on what people think the named role means!

My oddest title was ‘Senior Test & Integration Engineer’, which, given the nature of the consultancy work I was doing, just turned out to be a ‘normal’ tester role. Not sure what I was meant to integrate.

I’ve taken part in so many job description re-writes over the years in which the role doesn’t match the spec. One organisation advertised for a Test Engineer but had things like ‘must be prepared to write production code’ and ‘must be fluent in perl’ (we never used perl).

My biggest gripe with job titles are when they are changed best on emerging trends. When I started a decade ago, variations of ‘Test Automation Engineer’ weren’t as rife as they are now. Or, even worse, when a role is tied to a specific tool, like ‘Selenium Tester’. Absolutely grinds my gears. The biggest downside to this is that genuinely talented testers will completely ignore roles like this for fear that they might not have the technical skill to fulfill that particular title…when really the company just wants a tester who may or may not have to possess the ability to automate.

I suspect that people making confusing lists that conflate role and core responsibility perhaps create fud for someone who is not necessarily focused.

For me, my role is defined by my primary focus. In my job today I belong to a “test chapter”, since we embed testers into teams now. So I’m not in a “team” of testers who divvy up the roles between themselves. I have to do all of those things, and that’s going to be true for anyone working in a small company of <100 engineers. I agree with @kendomustdie , too much emphasis on naming what you do; in a job advert or job title is a communication blocker. Names are important, but doing the correct things in the job is more important. It’s more useful to tack your domain onto the end of your title in brackets.

“Selenium Tester” either tests the web on desktop or on mobile, or both, be explicit! But don’t limit your self and don’t overreach.

If a new Product Marketing Head started at your company today, and got into a lift with you and saw your job title on your lapel badge. Would they know what you can possibly help them with? If your badge says “System Integration Test Analyst” I’m pretty sure they won’t know what you do, and you lost the chance to make a difference.

I’ve been in the same company for quite a few years and its been pretty much the same role except for picking up new skills (API testing, automation testing). I’ve had the following job titles.