What tools do you think are underrated or misunderstood? – 30 Days of Tools, Day 5

It’s Day 5 of the 30 Days of Tools challenge. And today’s challenge is about dispelling misunderstandings and sharing your context and opinion.

What tools do you think are underrated or misunderstood?

Watch these talks on test tools that other community members are passionate about:

Feel free to reply to this post and share wherever you like, on the MoT Slack, LinkedIn, Twitter using #30DaysOfTools, Racket, your blog, with your team and any place you feel might inspire yourself and others to do the same. Let’s learn from each other throughout October. Visit the 30 Days of Tools page and select the “Subscribe to Topic” button to receive each daily challenge direct to your inbox.

Probably not so much misunderstood, but in my opinion underrated are tools for pairwise (or all-pairs) testing. Over the years it has helped me a lot in coming up with a concise set of test cases, or strimming down bulky test sets, while keeping confidence in the coverage achieved.

One tool in this space which is my favourite is PICT from Microsoft. Very lightweight, and I like the fact you can use it from the command line.

If you want to learn more about pairwise testing, check out Venkat’s course on the MoT DOJO.

Selenium, by far, has the worst reputation through no fault of its own, at least not entirely. People love to call Selenium tests flaky, bad, slow (any UI E2E really). I haven’t encountered cases as of today where a “flaky” Selenium was the actual root cause. Most often than the issue was with the test itself, i.e. synchronization issues, resilience issues, bad assertions or with the SUT, i.e. bad testability, stability issues, performance issues etc.

The logs, across all tools. We as SDETs, automation engineers, test engineers often forget to put value into proper logging, which often leads to horrendous debugging experience or figuring out what the actual failure was. Think how many times did a test fail on CI and the logs were worse than useless. Either there are not enough, or there are too many to make sense of anything.

Gatling, I love Gatling. I can admit it is already pretty popular but I’m really into the idea of having my load tests behaviour described in actual code, instead of some YAML or god forbid XML format.

Confluence and Jira.
They’re often painful to use, for sure, and they move the cheese a lot.
But, I’ve worked now at companies that use alternatives to these, and I really missed the functionality and speed that both Jira and Confluence provided.

It seems ‘Collection variables’ are a little bit more hidden, but I find using them is cleaner - it encourages users to create and set variables only when they are needed.

Collection variables are also baked in when you export the collection. This saves a lot of hassle when trying to use something like Newman to test with - you don’t have to consider all the environment variables.

I use James Bachs perlclip tool quite often.
It’s just a perl script that will generate strings or sets of strings for you - it’s particularly useful when I need, say, a string exactly 1000 characters long.

Excel/LibreOffice Calc, OK it is old school but it can help a lot

Browsers DevTools! So many informations are there!

If don’t know Lighthouse try it! I wrote an article on it yesterday Google Lighthouse outil phare des audits des sites web (but you need to use chrome or something else to translate it).

In case you missed it, today’s livestream with Mark and Richard is now available to watch. 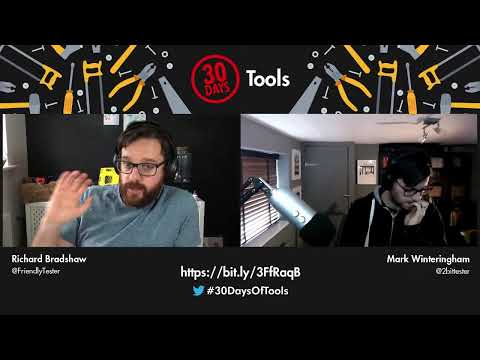 Probably a lot of UI Automation tools and “AI” tools. If I’m a fan or not of UI automation it does have its benefits.

CLI, it’s so much more useful and easier to script. People are just afraid of it and it makes it misunderstood and scary to use for many.

Azure DevOps TestPlans, you can link your CI build to certain automated tests & test plans to tag off your tests. It’s insane how much you can do with it.

hat your article is in French so not everyone h

Merci this helps. Also a nice writen article. I will definitly check out the cypress part in combination with Lighthouse. Thanks!

Thank you for this! I clipped it into Evernote and it stays in English. Agree with Bjorn, I want to explore this more especially the tie in with cypress.

For free tools: ACTS from NIST is also a great tool for pair-wise, or any other of pairing.
For a paid tool: Hexawise is also worth looking into

Currently, I see Playwright getting bad rep on Reddit just because it is backed by Microsoft. People won’t even try it because of that and I believe it is a great tool.

Those requiring outside of the box thinking? This is a tough one to answer in a general fashion…

Mind maps are a great tool that I don’t see enough chatter about.

According to me an underrated tool is vi. It is a text editor.

This command is part of UNIX, which is used on many servers. This is also applicable for the operating systems of Apple computers. For the Windows users, vim is available.

The interface is intimidating for the beginner. On the other hand the features are good:

Record and Playback is so misunderstood that I want to rename it to Record and Refactor. Maybe then people would understand it better and appreciate how it can be useful.

The Unfortunate Misunderstanding of Record and Playback (#30DaysOfTools Day 5)

Here I am continuing with the Ministry of Testing 30 Days of Testing Tools challenge. No tool is more misunderstood that Record and Playback, so its no surprise that Simon Tomes decided to include …

I agree with Jira & Selenium. Let the tools define your way of working and you’ll hate them. It’s easy to get lost in ways of working for both of them. Be aware to not fall into these traps and you’ll see that they can be powerful instead of annoying.

Lots of people know Git, and many of them use it. Many of them use the 'Posh-git it gives you so much more information of you current branch. Now don’t stop there, because ‘Oh-my-posh’ is an extra layer on top of it to improve it even further!

I love the BugMagnet plugin. I can generate test data in webbrowsers so fast. My favorite: Iñtërnâtiônàlizætiøn​:snowman_with_snow: