What was your reaction when you first saw Test Automation?

I am curios to know how you reacted when you first saw Test Automation in action?
Now I do not mean implementing a test script, I mean being the audience.
Where you curios? Did you want to know how it is done? Did you think it was magic? Were you afraid that it will take your job 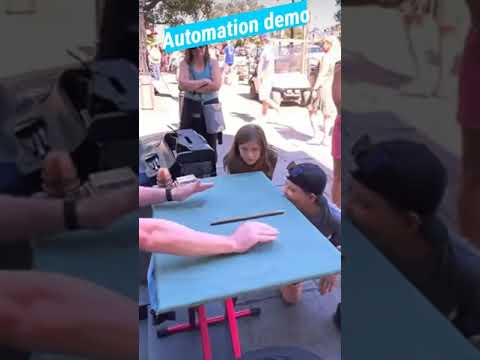 I felt the same way as I did when I was a robot control driver developer and one customer walks in and says all these robots are really the same, so I said “yes they roughly are”. They all use very simple instruction sets and all do the same thing I say. He pipes up and says, the control instructions for them will one day be interpreted by an AI… And an AI will do this for you. I entertained the thought for a fortnight and then realized it was really an impossible dream. That was about 20 years ago. Still an impossible dream.

I try to remember … It was a long time ago.
I was curious how it was done and wondered what capacities it had. And what where common problems.
I was quite prosaic, mostly technical interested.

I was not afraid about losing my job.
I was happy to get this tool so I don’t have to bother with boring repetition and cover more cases and speed things up.

(There is no test automation, automation is a tool for execution and checking in testing. Testing is much more than that.)

My first thought when I saw an automation framework was: “Hey, this looks just like coding in Visual Studio!”

At first it was exciting, then it became a race against the clock since my company is wanting to outsource it, which isn’t bad. But, I know if the test automation breaks it isn’t that company’s highest priority in fixing…

“What is this black magik ? I want to learn this.”

My initial thoughts were:

I never saw it until I tried it.