As some of you may know in Belgium meetups are a little different, or at least people are used to a different format!

Lightning talks!
We start off with lightning talks, where you can give a 5-10 minute presentation about something cool you want to share. These are usually rather informal, so don’t worry if you’ve never done this before - this is a great opportunity to give a talk in a friendly environment or you can just listen the first time

The Open Space!
We have a couple of rooms where 30 minute sessions are run in parallel. A session can be an informal discussion in comfy chairs, a demo or presentation, practicing testing dojo’s together, mob testing, or anything in between. There are no requirements for you before you can join a session - just bring yourself, an open mind and your opinions. Before the Open Space starts, anyone can suggest sessions about something they want to learn about. Whether you’re an expert on some topic, or you’re just getting your feet wet, the only requirement to run a session is that you’re there to host it.

All of the topics will be posted here, to discuss further. I’ll personally bring a lightning talk myself, feel free to do so yourself, no obligations; you can just come and listen also. 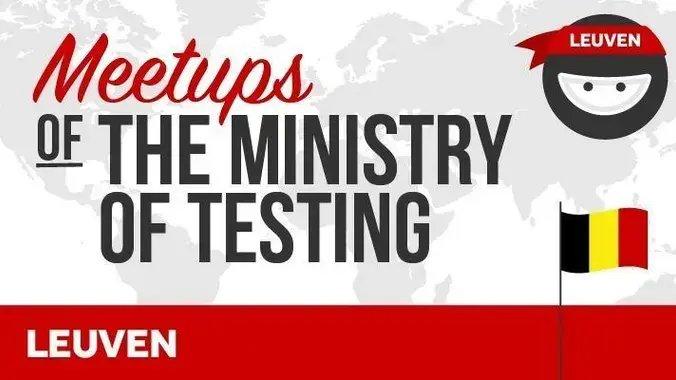 Everyone is welcome! Do you have a passion, interest or curiosity in software testing & quality assurance? Great, you're in for a treat! Whether you're a seasoned expert o

It’s a very fun concept to do and it’s more interactive, which is a good bonus and a preferred thing from the guests.

If you are joining a session and it doesn’t interests you, you can leave to another session to get some more knowledge, even the person who suggested the topic can leave as long as he does the intro/demo/presentation/… no mean looks

Hey! I’ve been asked to write a write-up retro of our meetup since it was our first one and we use a different format then most of the MoT-Meetups. Which might be inspiring for you guys!

It’s a small talk about a new technique, framework, a methodology or just a small presentation of something cool you’ve recently done. It takes about 5-7minutes and 2 minutes of questions but most of the time there won’t be many questions.

If there are many questions or people have a high interest into the topic, we’ll just say that it will become a topic in the Open Space/Unconference later.

Some examples of our Lightning Talks

When the event takes place, you’ll just yell ‘Has anyone prepared a lightning talk?’ and people will come forward.

It is advisable to ask some people upfront to prepare a Lightning Talk. Especially if it’s the first time doing this format, many won’t know or understand how it works at the start, but they’ll jump right in next time. Always prepare one yourself as a backup!

We have a couple of rooms where 30-minute sessions are run in parallel. A session can be an informal discussion in comfy chairs, a demo or presentation, practicing testing dojo’s together, mob testing, or anything in between. There are no requirements for you before you can join a session - just bring yourself, an open mind, and your opinions. Before the Open Space starts, anyone can suggest sessions about something they want to learn about. Whether you’re an expert on some topic, or you’re just getting your feet wet, the only requirement to run a session is that you’re there to host it. 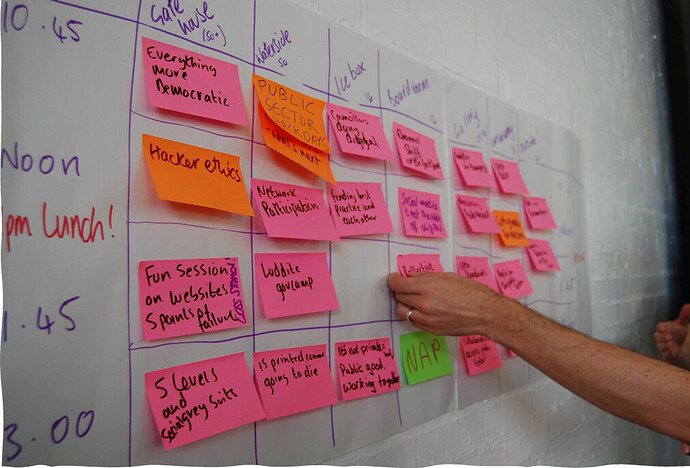 How did we come up with topics?

That’s the beauty of it, the people do! You spread around post-its and markers and you can ask people to write down things they’ll like to know more about. Some examples I gave:

After that we have a schedule like so we let the people come forward and explain their post-it out loud and let them place it onto the board. Some people even yell from the audience ‘I can help with that’. They place it on a specific room and during a specific time slot. Once everyone has placed their post-it on the board, we’ll discuss the board and placement of the topics, since there might be a few parallel sessions you might want to attend. The swapping of post-it’s to another hour/room is taking place until ‘almost’ everyone is happy. 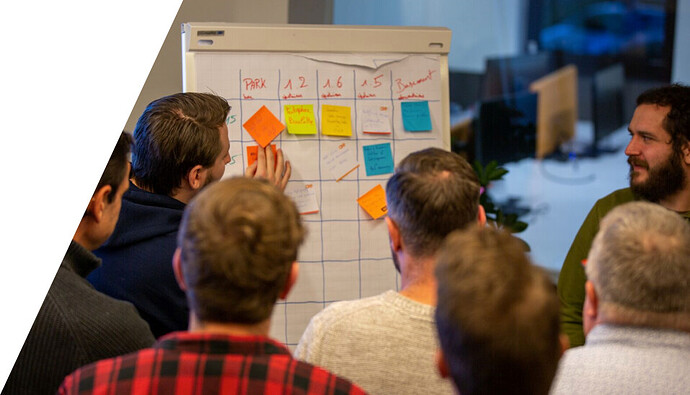 Topics that we had

If there are too many topics and zero interests in some of them, we remove them from the board.

The Law of Two Feet

“If people find themselves in situations where they are neither learning anything nor contributing, they are responsible for moving to another place – using their two feet to find a place where their participation is more meaningful.

This even counts towards the host of the session. It is required for the host to explain the session first to start the discussion. Once he has done that, then The Law of Two Feet applies to him also.

Why did I go for this format of Lightning Talks & Open Space/Unconference?

I’ll be honest and I less and less like the concept of joining a meetup which have 1 or 2 speakers. It’s mainly one topic and a single interest, if I’m not interested in the topic, I simply won’t attend the meetup. In Belgium we started using these concepts of Lightning Talks & Open Space. Which is very much the same as a ‘mini-conference’.

You learn more by doing so I wanted full interaction between all attendees and hosts. I even made the attendees hosts… (volunteers of course).

We use the Lightning Talks to ease in the knowledge transferring to people and getting comfortable with the scene/environment. After ~3 Lightning Talks we move to the Open Space format.

How “I” did the marketing for the meetup

A meetup group was created by MoT and since it was new, we didn’t many people in the group. Some people found it themselves and some needed a push! When I found a sponsor for the event, I sat together with some people of the marketing team to see what they can do and talk about the event.

I’ve created a Linkedin post myself, so did the company of the venue. I’ve made a post here on the club, but I don’t think there are many Belgium testers on here… Prove me wrong!

The company also had some mailing lists of people who left the company, applied to the company and they’ve sent personalized emails towards them about this event. Mouth-to-mouth advertisement is still the best marketing there is. People from the company that were interested in joining the meetup asked their friends and (ex-)colleagues to join also because they were decided to join. We advised people to ‘bring a friend’ so if you don’t want that ‘first-time-awkwardness’ you can always sit together with your friend until you’ve made new friends!

Our first meetup we had 53 Attendees on Login to Meetup | Meetup, some DM’s they couldn’t join and we had 51 people show up on the event itself.

Food and drinks are crucial for a meetup. People will most often directly come from their workplace, so food is required. Try not to provide pizza ALL the time. The company sponsored some snacks like chips (crisps?) and for dinner it was a pasta-buffet. We often rotate between like Pizza/Taco’s/Pasta buffet/Mashed Potatoes with … .

Drinks were also provided: Water, Soda’s, Coffee/Tea and even some Beers and Champagne.

It’s the first time that I personally saw champagne, but it left a very good impression towards the people. A lot of people took pictures and posted it towards friends. #FreeMarketing

A lesson learned here for me is that I need some kind of #hashtag so we can do some more marketing!

We also had desert which was a surprise for me!

That’s it, if you have any more questions, feel free to ask.

Congratulations @kristof for such an outstanding meetup !!!
keep rocking and looking forward to the next ones you will organize.

This looks like the meetup was a real blast!

You sir are correct!